Elena Kochin RD > Blog > Articles > How Glyphosate triggers intestinal permeability and inflammation, and why it may be linked to AUTISM?

How Glyphosate triggers intestinal permeability and inflammation, and why it may be linked to AUTISM?

How Glyphosate triggers intestinal permeability and inflammation, and why it may be linked to AUTISM? 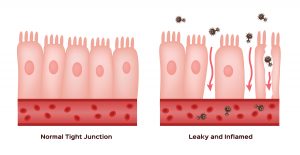 Almost all of us crave for Breadbaskets at restaurants, but wait! Have you ever felt the need to know either it is made of organic raw materials or it is dripped with glyphosate? The answer is: probably NOT.
Now, for those who know very little or not at all about Glyphosate – it is a weed killer compound and the active ingredient in RoundUp® that was first introduced and tested by Monsanto in the year 1974 for agriculture use and later on it was available as a domestic herbicide. In order to get rid of different kind of weeds that harm primary crops such as corn, soybean, wheat, canola, etc. weeds are sprayed generously with Roundup(Glyphosate).
A few years back WHO (World Health Organization) declared this herbicide as carcinogenic, and since then it received a lot of media coverage, which also resulted in highlighting other associated health risk related to the use of Glyphosate. Among which the mysterious one was its role in triggering intestinal problems (intestinal permeability and inflammation) that may lead to ASD (Autistic Spectrum Disorder).

How it Glyphosate is linked with intestinal problems?

Based on studies conducted on Glyphosate it was found that it works as the intense stimulator for a protein called zonulin. When zonulin is produced, it starts damaging the tissues of the tight epithelial junction and weakens our barriers that play an important role in keeping things in our gut where they belong. In the case when the tight junction membrane in the gut is damaged, it leads to intestinal permeability, inflammation problems, and leaky gut. Undigested proteins and bacteria get access into the circulation and can cause systemic infection. Also, the immune system gets over activated and starts mistakenly attacking undigested protein as it was something dangerous, all this chain reaction ends up in body inflammation.
We know that the gut and the brain are linked to each other, and the inflammatory or permeability in gut lead to the inflammation of our CNS (Central Nervous System), which causes neuro-inflammation. Leaky gut eventually leads to leaky brain and things from the gut can get to the brain and cause trouble.
Gut enzymes such, lipase, trypsin also get contaminated with Glyphosate and lose its function to digest proteins including zonulin (this protein is released when we introduce gluten to our digestive tract). Zonulin normally gets digested relatively quickly and don’t affect tight junction drastically, however, when trypsin is not doing its job it lets zonulin to stick around for longer periods of time, leaving the tight junction open long enough to cause intestinal permeability and leaky gut as a result.
Glyphosate affects myosin. Myosin is one of two proteins in our muscles. We have myosin in our gut; it plays a role in contracting the gut and push the stool through, it is also in the gallbladder to release the bile acids when needed. What is seen in autistic children is poor bile production, disrupted digestion and poor gut motility that results in constipation. SIBO (small intestinal bacterial overgrowth) also happens due to poor motility and prevalent in kids on the spectrum.
Glyphosate disrupts the shikimate pathway in plants, and it supposed to be safe for human as we don’t have such a biochemical pathway. However, out microbiome bacteria, that live in our gut has this pathway. By ingesting Glyphosate with food, we introduce it to our beneficial gut bacteria and destroying our microbiome. As we are losing our beneficial bacteria we lose the ability to produce aromatic amino acids (our gut bacteria are responsible for making them): tryptophan, tyrosine, and phenylalanine, that are essential precursors to many neurotransmitters, thyroid hormones, and folic acid. As a result of the above process, we become deficient in those.
Glyphosate deplete manganese, and it causes glutamate to be toxic and it letting glutamate go into the brain. Too much glutamate overstimulate brain cells and cause its death.
Do I need to say more…

Now the choice is entirely yours, either you serve your family plate with food filled with glyphosate bullets, or you go for the organic food. Thinking like ‘it is useless to be considered’ or “I can’t be the one” is going to affect you eventually. The only way out to deal with this chaos is to go for healthier choices, take precautionary measures to heal our gut or keep it safe and try to restore what we have already damaged or depleted.